This morning I can't find words to express why this photo makes me feel so good.  So I won't try.
Just sending it on, hoping you might enjoy it too.
Happy harvest, happy autumn, happy Thanksgiving to you all. 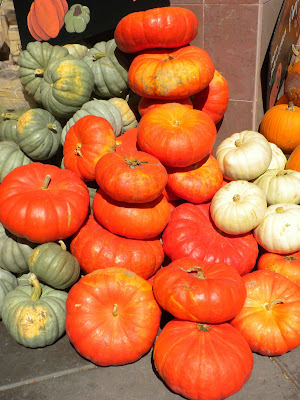 Posted by Cheryl at 7:08 AM No comments:

Yesterday I finally cleared some bobbins by plying the singles that had been languishing on them. Their sister skein is two years old now.  It was time. 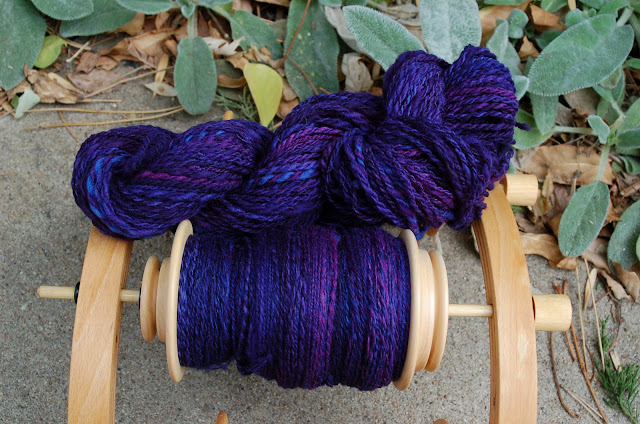 All was going well until the plying reached the lower levels of the spinning, the part that was spun a long time ago, many turns and twists before I was a consistently adequate spinner.  Though the strands were precious to me, we began to drift apart; the spinning was weak, it would not hold up to the untwist of the plying.
I did get a bobbin nearly filled with solid, good yarn, yarn that nicely matches the first skein. Together they will be enough to knit something cozy.  But the bobbins still held the weak, unstable singles.  I need my bobbins.  I'm never going to use that weak yarn.  It was the product of my learning and practice and while I appreciate it for that, it has taught me all it could.  It then occurred to me that learning to spin feels a lot like learning to bake, and I certainly didn't keep every burnt cookie.  My bobbins were full of woolly, burnt cookies.  Crumble those cookies.  Free the bobbins. 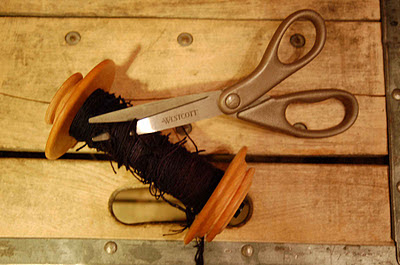 With the help of my trusty, "I can cut anything with these", scissors, I managed to remove the  unstable load with nary a scratch or gouge to the wood.  It actually felt good, letting my old spinning go, knowing these bobbins would soon be filled with newer, stronger, and better strands. 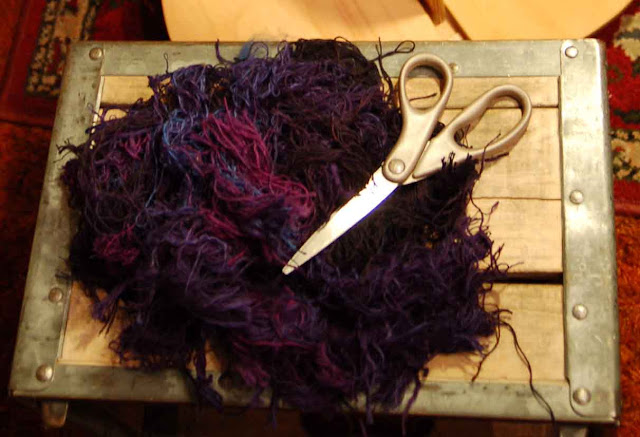 Come spring, the robins that return each year to the studio garden will no doubt enjoy the blessing of hand-spun nesting materials.  I'll be happy to share with them.  It's good to find a constructive use for burnt cookies, woolly or otherwise.
Posted by Cheryl at 7:52 AM 4 comments:

Here's an addendum to yesterday's post. It turns out that the "engaging name of Ravensdown" stamped on the mystery wool sack is basically New Zealand speak for  "fertiliser".  Yes, my lovely wool was in an apparently recycled, albeit very clean, fertiliser bag.  I admit to being a bit deflated when I learned this fact; the name Ravensdown had conjured such lyrical images in my fertile (I had to say it) mind.   It makes sense though.  In New Zealand,  an island country and very "green", the ranchers, as ranchers everywhere do, would use what they had available.   It all just adds to the reclamation aspect of this entire adventure.  Back to earth we come.  Recycle. Reuse. Right and good. 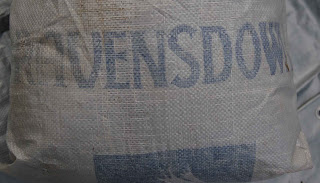 But it doesn't end there.  My research lead me to Woolipedia and to the information that wool has historically been used for fertiliser.  For decades it has been researched as a highly desirable source of slow release nitrogen and much of the research has been taking place in New Zealand, where the company, Ravensdown, is a major supplier of agricultural fertiliser.  Could it be that the beautiful, colored fleece, not white enough for the textile industry, had been originally destined to be fertiliser?  Was my Romney treasure in a fertilser bag for a very good reason?  Maybe.  But that's conjecture.  I know for sure that the wool is well shorn, well skirted, as nice as many fleeces I've seen for sale, and it came to me from another spinner's stash.  Beauty is in the eye of the spinner.

All this just makes me more determined to make something wonderful from the mystery wool.  At the very least I could use it to grow tomatoes.  It is already turning out to be a yarn spinner's gold, in more ways than one.

Posted by Cheryl at 7:58 AM No comments:

One Bag Full of Mystery

I was recently gifted with a bag full of Mystery Fleece.  Better than six pounds of mystery.  On first glance I knew it was spin-able, with a long staple and lovely coloration.  The bag had no markings other than the engaging name, "Ravensdown", stamped on the outside.  I was told it had been stashed in an attic for unknown years but had originally come from New Zealand.
Please know that I do not recommend this method of obtaining wool.  It is risky business.  But I was intrigued, seduced even.  Still, I kept my head enough to remember to practice safe woolery. The bag has now been a few weeks in our shed in compliance with my rule that no unknown animal fiber enters my studio until it has passed inspection and received security (from bugs) clearance.
I was curious and hoping to find out about the fleece's lineage.  I took a tiny sample to Maggie Casey, one of my spinning gurus, who thought that it was most likely a Romney fleece.  I told her it was not very greasy so I thought it might have been washed once, but that it seemed to have slightly felted in the bag over the years.  She wisely suggested I give it a good washing nonetheless.
The fleece had hardly any VM, it had been professionally skirted, but there was enough evidence for me to conclude that what I thought was felting was just old grease that had stiffened. Yikes! Enlightening information though, being more evidence that it is a Romney fleece;  according to Deb Robson in The Fleece & Fiber Sourcebook, it is characteristic of Romney to have little grease.  Frankly, if I had initially known that it had never been washed, I would have probably also thought it a hopelessly old mess and tossed the entire bag.  Too late.  Now I have bonded with this fiber.   I decided to approach it as a reclamation/ experiment/ learning project.
Being very, sometimes obsessively, concerned about wool eating critters, I was wary of this bag o'wool and before bringing it into the studio, I checked it out on the back porch with a hawk's eye.  I saw no evidence at all of wee buggies so it headed for a good, and definitely needed, HOT and SOAPY (ala Alden Amos' advice on questionable fiber), five round (ala Maggie Casey's washing directions) bath.  It cleaned beautifully and is drying now.  It came out un-felted, even with all the hot water and soap. Well done valiant wool saver!
I borrowed a Louet drum carder from the Handweaver's Guild of Boulder, membership does have it's privileges, so I hope to be carding by Wednesday.   I'm unschooled in combing and really do like a lofty yarn, so while it may be more traditional to comb a long wool, carding alone is fine for me here. I have spinners coming on Sunday for a Spin In so that will be a good time to get rolling on the Romney.
On the back side of the bag there was one other marking. Could this have been the original price for this bag of New Zealand colored Romney?   My spinner's heart jumps with glee! 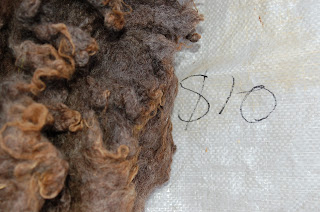 Also it's a real clue to the age of this wool that this beautiful fleece had such a small price. I've recently seen a very similar fleece priced at $7 a pound. Because of the demand in the past for exclusively white wool for the clothing industry, shepherds sometimes could not give away colored fleeces, even of this quality.  I very much like the idea of making use of this beautiful fiber, elderly though it may be.  It seems strong, not brittle, soft, and lustrous.  The carding and spinning will prove this pudding, I'd say.
PS.  I couldn't stand it any longer.  I found some locks that had dried (I love living in Colorado, high and dry), teased them (well, they were teasing me...), carded a rolag and grabbed a favorite spindle.

Look at that shine! 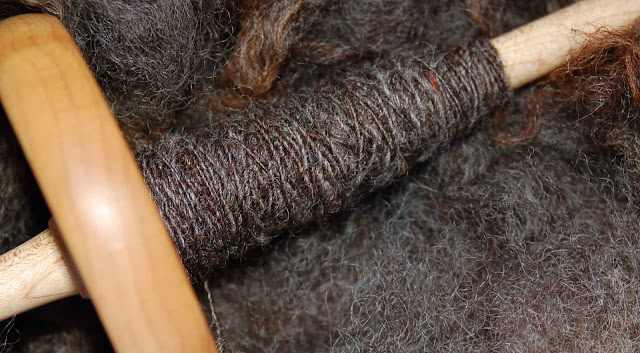 Shawls from the Center

Here's a bevy of samples for the Shawls from the Center workshop that I'm teaching tomorrow at Shuttles, Spindles and Skeins.  Lots of techniques to share.  Got to love a tomorrow like that. 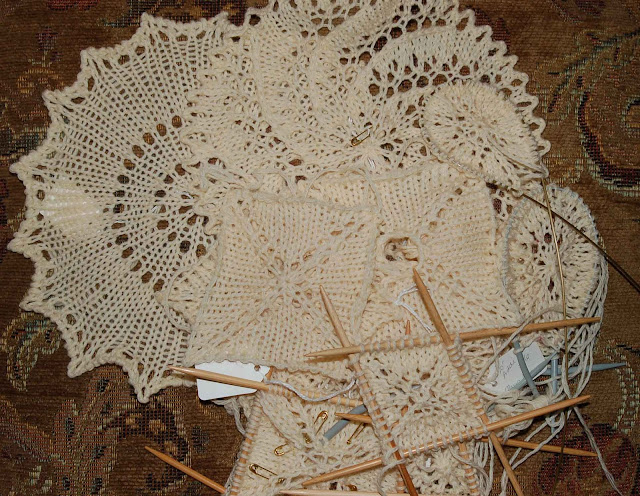 Spinning yet to come

Some gorgeous Cotswold fleece is washed and ready to spin.  Just look at that lovely cloud from a few picked locks.
Life (and spinning) is good! 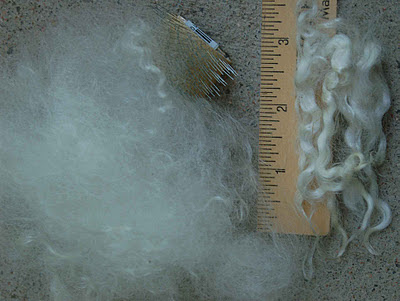 Posted by Cheryl at 5:50 PM No comments: