Just about to finish another one hank project with my hand-dyed yarn.  Getting it ready for the Sew Expo next week and then Stitches West in February.  With the great yardage in these hanks a knitter can do all sorts of things with just one. 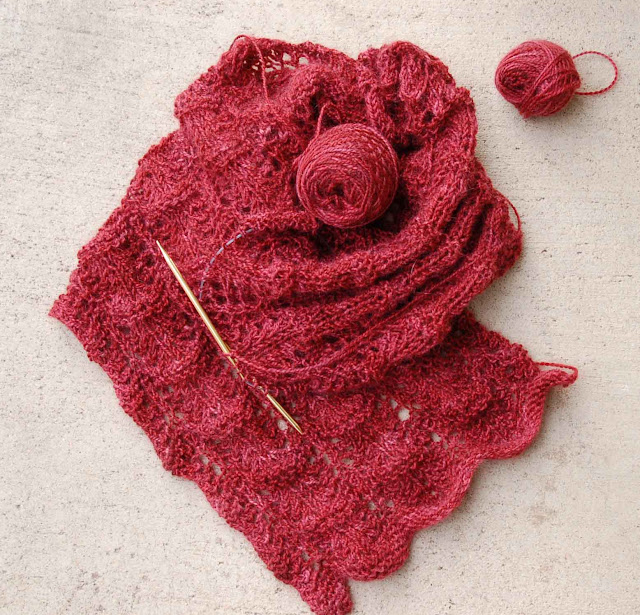 Have you ever noticed that when you are getting near the end of a project with a set amount of yarn that you tend to knit faster?  I do!  Do I think that will make the yarn go farther?  You know, I think I do!  Quantum knitter in action.
Posted by Cheryl at 9:31 AM 2 comments:

I've got tussah silk flowing on the wheel this week, coincidentally in celebration of Chinese New year.  I'm actually involved in a spinning challenge called Spinner's Poker and my "hand" included silk, lace weight, and orange for the color.  I was bit worried about the orange thing until I found this gorgeous silk at Treenway Silks.  The color is one of their Salt Spring Island Series and is called Cranberry Calypso.  I see lots and lots of oranges and that is making me very happy.  Leave it to silk to convince me that orange is my new favorite color! 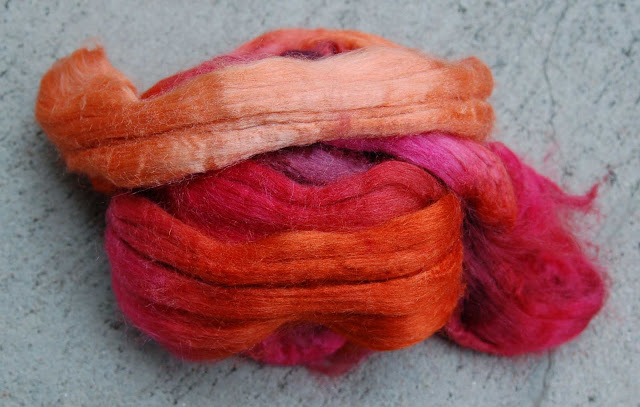 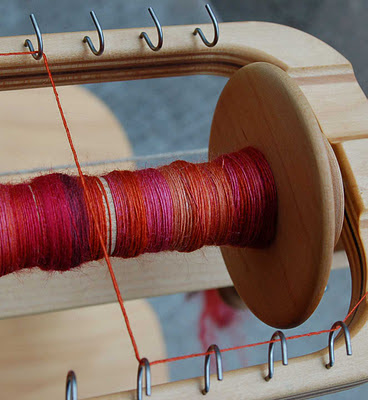 Posted by Cheryl at 8:17 AM No comments:

The three days of the Knit Knack trunk show have been fabulous.   Just like the shop's trademark chandeliers, Knit Knack and it's knitters just shine. 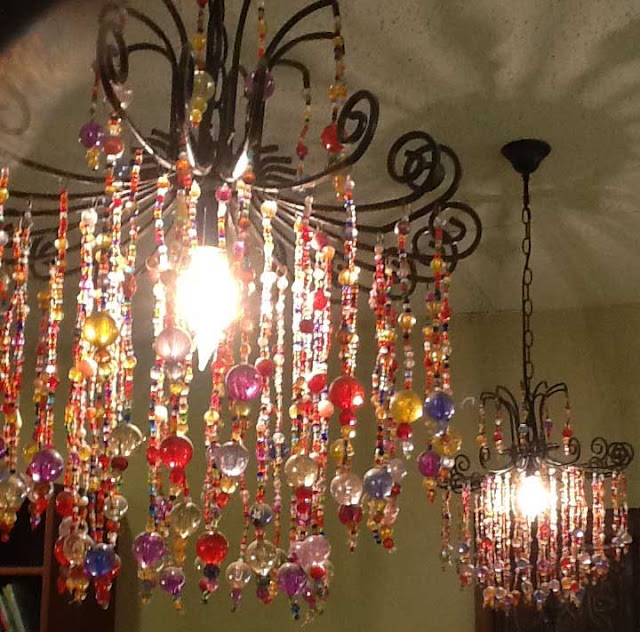 We've had such a great response that we are extending the trunk show one more day.   Drop by today to try on some of the Dancing Colors garmets and see the yarns.  Or come back if you've already been here this weekend.  We'd love to see you again.

I'll be in the shop all day at this table teaching the Cusco Workshop and Gerri and her staff will be happy to help you with the trunk show or any of the other wonderful projects you can find here..  Sundays are great fun at Knit Knack! Come join me at Knit Knack for a trunk show this coming Thursday through Saturday.  We'll have lots of hand-dyed yarn and original designs for you to try on, and I'll be there all three days, 10 am to 5 pm, to sign books, and help you get inspired.

The Cusco Jacket from Knitted Jackets  might be one you especially want to try on. Then on Sunday Knit Knack is hosting my Cusco Jacket workshop. We'll be making a miniature Cusco Jacket to learn the techniques including knitted lace,  sideways knitting, circular knitting and some great construction details.  Knitters of all levels are welcome.  you just need to know how to Cast on , knit and purl.  I'll take you on from there.  There are still seats open so give Gerry a call and spend Sunday knitting with us. 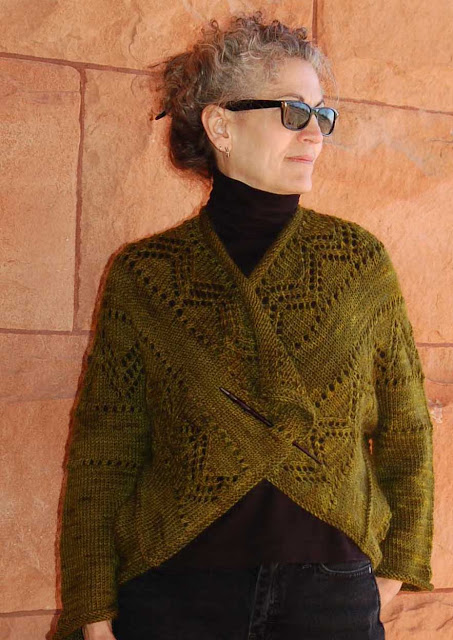 As many of you already know,  Knit Knack is a charming and beautiful shop with lots of goodies for your  knitting pleasure. 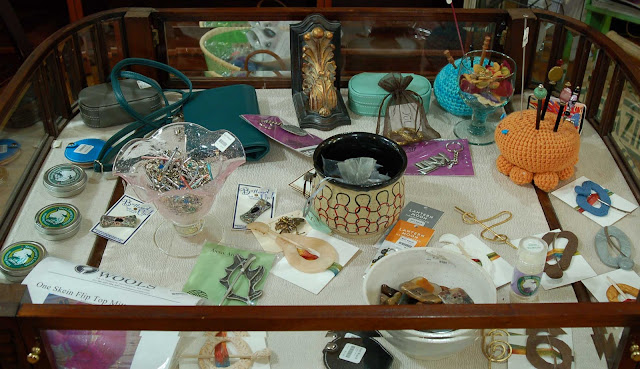 And Charlie is looking forward to meeting you there! 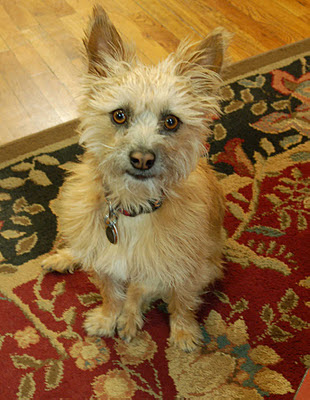 The Fleece Goes on

Two of the five new fleeces are washed and one is being carded.  I love the way the fleece changes from clean locks to teased fiber and into a carded batt.   This is luscious feeling stuff. 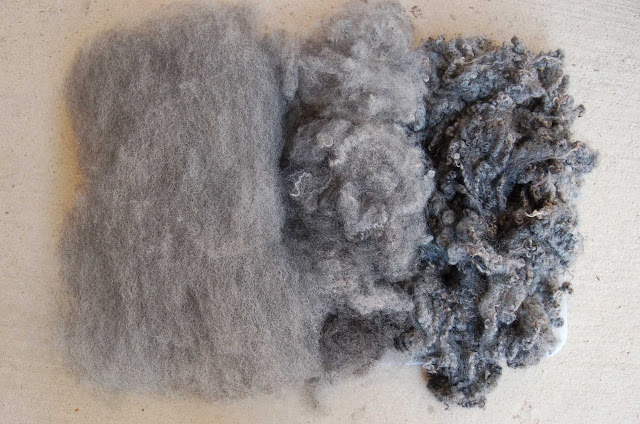 It's clear that a good wool fleece storage system has become imperative in the Studio; carding and spinning can only proceed so quickly and I want to enjoy the process, not just push for product.  The major issue with storage is how to keep the precious wool from harm and infestation by marauding, wool-consuming vermin until it can be converted into gorgeous garments.  After some extensive research I decided that I like the combination of thoroughly clean and dry fleece inside a muslin bag, placed inside a clear plastic lock-top tub, with a tulle wrapped bundle of dried artemisia and lavender tucked inside.   My reasoning is as follows:  Clean wool is the only kind to store for any period of time; grease, dirt, etc. (especially etc.) attract bugs and are just yucky (technical term). A cotton muslin bag both contains the sparkling clean and dry wool and lets it breathe.  The clear tub is a physical barrier to random intruders of the dusty, buggy, or (heaven forbid) rodent variety, it lets in light (wool eating bugs hate the light, love the darkness) and even though the top locks, it is not totally airtight, which again is good for letting the fiber breathe.  Dried artemisia and lavender give off scents that repel the unwanted visitors and are not noxious to the rest of us. 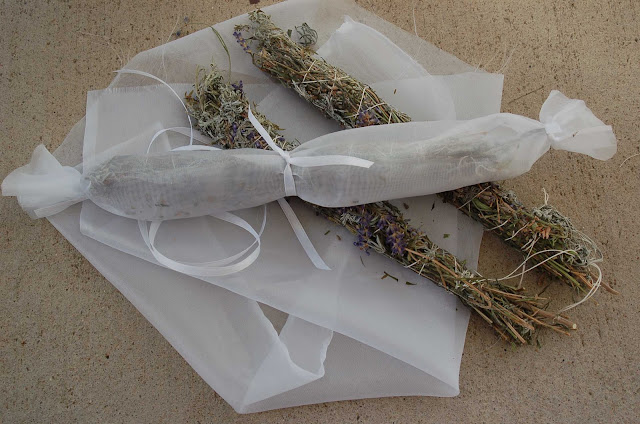 Artemisia is historically favored as a pest repellent (and as the flavoring for absinthe).  I find these herbs to have very pleasant scents.  Growing, collecting, bundling and drying them has become a favorite summer practice.  Wrapping the completely dry herb bundles in a layer of sheer fabric keeps the fragments from adding sticks and stuff to the fiber.  Pretty, too.  A nice gift for spinning pals.
Wait a minute. Back up. Muslin bags? Yes!  Did I buy muslin, wash it and sew these bags?  No!  I found a great source of 100% cotton muslin "bags" in the form of the very reasonably priced Dvala pillow cases from IKEA®. 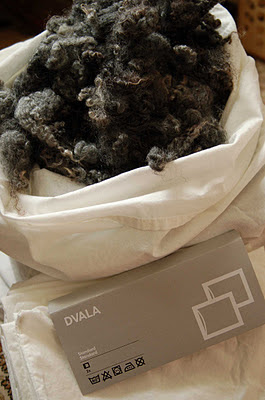 So here you go, clean locks all tucked in awaiting the teasing and carding.   I'm ready to spin the first batt, probably during tomorrow's daily spinning.  What an amazingly fulfilling experience this all is.  And then I get to knit with the yarn.  Can it get any better? 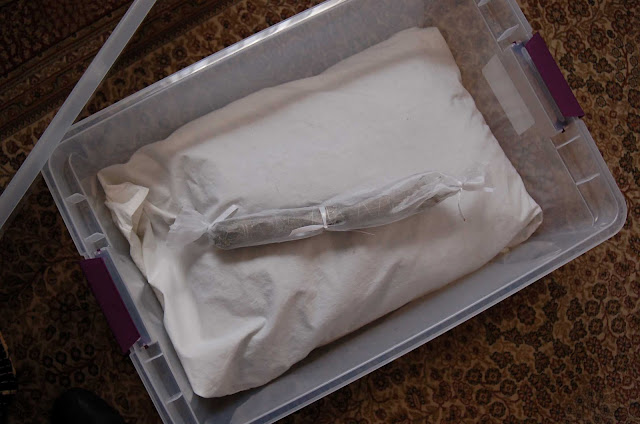 We're working on new yarn photos.  Here's a snap I wanted you to see. 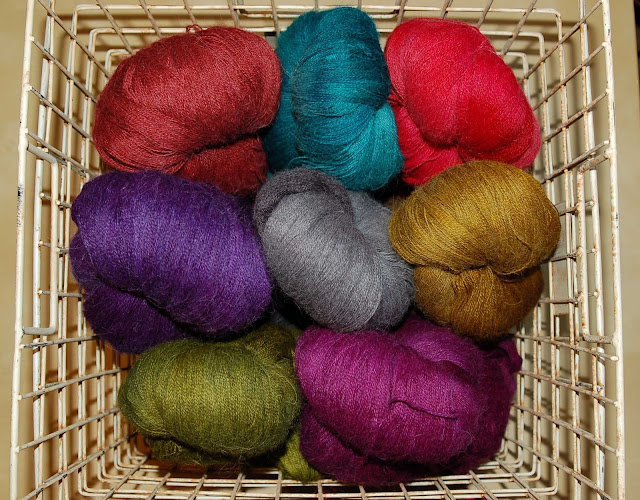 This basket holds over 19,000 yards (I kid you not) of my Gossamer hand-dyed alpaca,  just waiting to become a shawl.  Or rather many shawls.   Can't wait to see where knitters go with these.
Posted by Cheryl at 11:00 AM 2 comments:

I've got the winter blues, but in a good way.  My recent knitting has tended toward the blue end of the spectrum.  Here's some of what I've been up to. 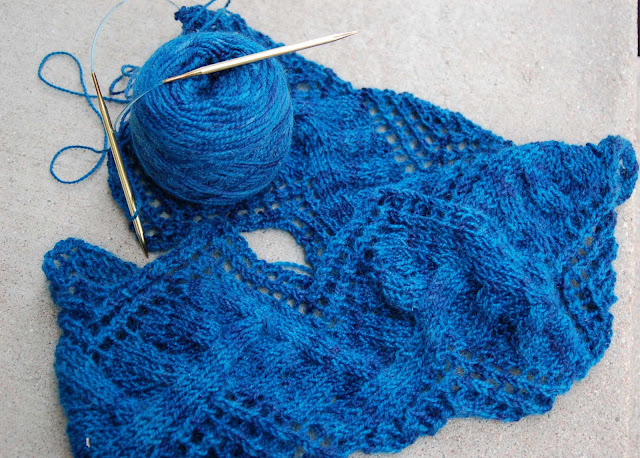 On the needles is a new shawl, knit with Dancing Colors Yarn in the color Bluet. The shawl is a one skein project that will have it's premier January 19 at Knit Knack, during the 3 day trunk show. and workshop event.
And going up in the Ravelry shop this week is the Dakota Shawl Redux, one of my most popular slip stitch designs, updated and revised, also in Bluet with a black companion yarn to set it off. 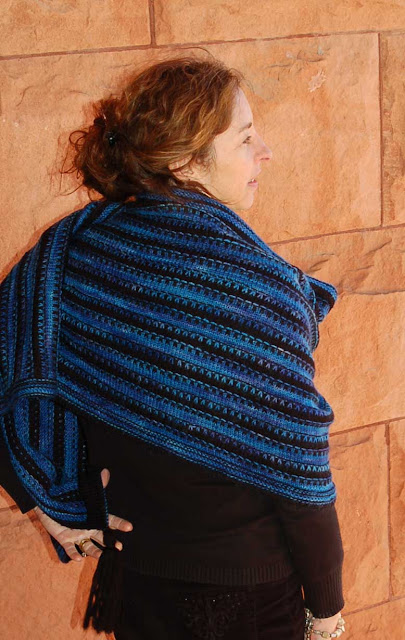 I've got shawls on the brain and that's a good thing since the Shawl Study Workshop starts up for 2012 on Thursday.  It's a full house (studio) for January but there are openings in the upcoming months.  The workshop has an ongoing, join when you like, work on what you want, format.  You can come every month (two classes a month) or just the months that suit your schedule.  We've been covering some beautiful shawls and great techniques.  Join us if you can.
Well back to my knitting.  I have an old love tune stuck in my head... "Blue, blue , my world is blue"....
True, it's blue, but very warm and cozy.
Posted by Cheryl at 5:21 PM No comments:

2012 is starting out well here at the Studio. 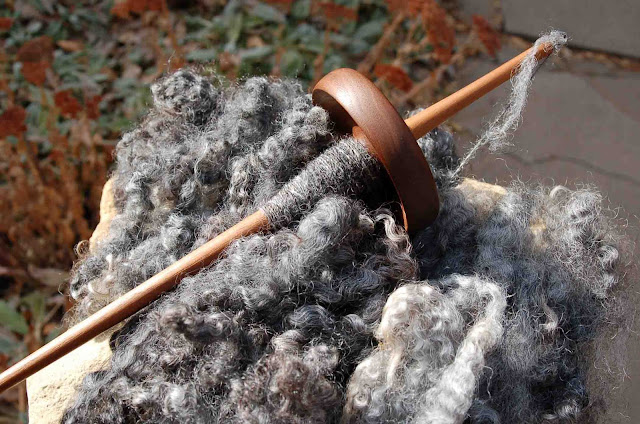 On January 2, I took a little drive over to see Susan Du Bois of Treenway Silks who has just recently relocated this incredible fiber source to Lakewood, Colorado, about 5 miles from me.  I was lured out of my holiday bliss by the January first newsletter in which Susan talks about the once a year shipment of New Zealand fleeces that had just arrived.  On the list were some Gotland fleeces, a breed I've been curious to try.  It was a beautiful day, sunny and bright, and I thought I'd just go over for a look as she had some smaller fleeces listed.  Just a look, you know.  I was lucky to find her in house, doing inventory, and the bags of fleece innocently sitting in her open garage.
A little back story here.  The last week of December, I had finally finished carding the Mystery Wool and while I thoroughly enjoyed the process of doing an entire fleece from raw to carded, I had already decided (and announced to my Dear Fellow) that I was swearing off fleece preparation for a while.  My plan was to work this year with the gorgeous fiber that I already have in the Studio and just concentrate on the spinning.
Resolution number one out the window.
While I knew the fleeces would be beautiful, Ashford fleeces are highly regarded, I was not prepared for the overwhelming desire that arose in me once I saw them.  I do believe that I was overcome by wool fumes when the bags were opened because I was immediately filled with a need to have this fleece.  Look at it!  Can you blame me?  And it is soft, really shiny, crimpy, and soft. 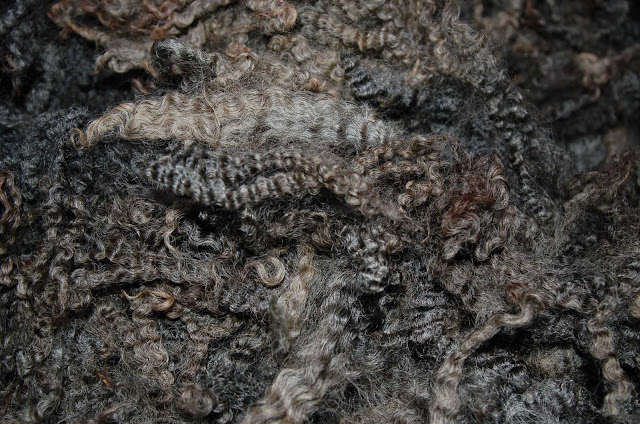 Two little Gotland fleeces followed me home.  And they were joined by a not so little English Leicester,  an irresistible Perendale,  and the sweetest bag full of Polworth you've ever seen.  When I break a resolution, I do it really, really well. 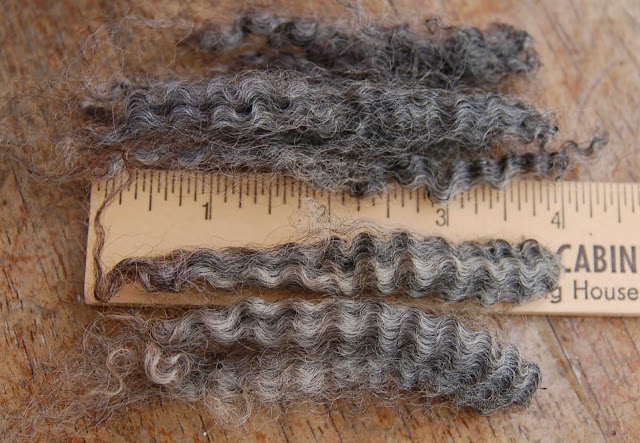 Yesterday, I washed the first Gotland.  It was quite greasy but had almost no extraneous matter, I mean hardly even a twig.  And it washed up beautifully.  It was dry enough this afternoon to open up a few locks and give it a quick spin on one of my Maggie Spindles. 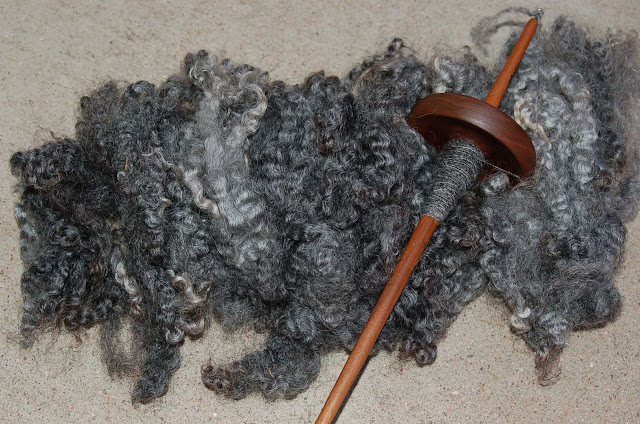 So you can see that, fiber-wise, things are starting out here very, very well.  I'm glad I love to knit, and spin, and wear what I've made because I just blew my entire 2012 clothes budget on  hand-me-downs from some sheep. 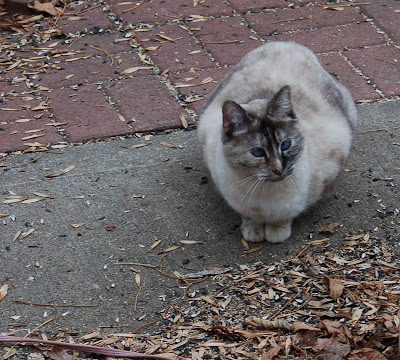 Even Scottish, the Studio garden cat, couldn't believe it when she watched me bringing in the fleece.  Of course she is cross-eyed so she undoubtedly saw me bring in 10 bags full.   Now that would be excessive!  Well, anything worth doing is worth overdoing, I always say.
Posted by Cheryl at 4:06 PM 4 comments: